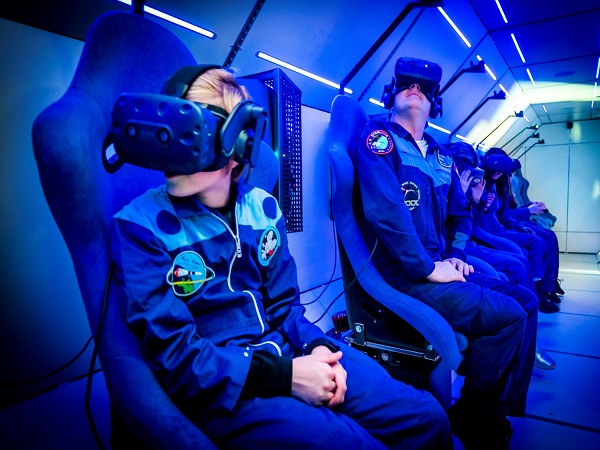 The prestigious Lovie Awards are pan-European prizes awarded annually to the best digital applications in Europe by the International Academy of Digital Arts and Science (IADAS). SpaceBuzz competed against 1000 entries from 30 countries.

Organizations such as IKEA, The Economist, KLM, the Ocean Cleanup and The Guardian were among the entrants.

SpaceBuzz is an XR-education program with the mission to inspire 100 million children globally with the perspective of astronauts: looking down to Earth from space.

By making them aware of the beauty and vulnerability of our planet, SpaceBuzz inspires them to become ambassadors of planet Earth. SpaceBuzz uses the narrative and experiential power of the latest immersive technologies.

As part of the education program, a 15-meter SpaceBuzz rocket vehicle will visit the school of participating children. On board, they will travel to space in VR, ‘experiencing Planet Earth’ through the eyes of an astronaut. Astronaut André Kuipers, co-founder and ambassador of SpaceBuzz, responded enthusiastically to winning four Lovie Awards. “This is a wonderful compliment for our unique team of astronauts, educators, scientists and XR-experts who have joined forces.”

Janine Geijsen, director, SpaceBuzz:  "SpaceBuzz is currently rolling out internationally, starting in France, Italy and Hungary. We are proud of this international recognition for SpaceBuzz. Immersive technology is ideally suited to give children a chance to learn through their very own ‘experiences’. It is great that our approach is seen and recognized internationally”.