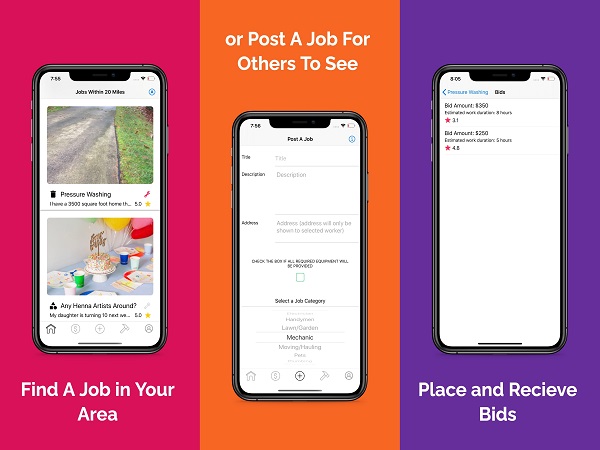 Bidbud, a mobile application that brings the power of trade and commerce back into the hands of the people, has announced its official launch on iOS and Android devices.

The simple yet innovative platform brings real world bidding into the gig economy by allowing users to upload a job they need completed, while giving workers the opportunity to place a bid on posted jobs that fit their unique skill sets.

The startup was created by James Fakhoury, CEO/Co-Founder and Elias Salmo, CTO/Co-Founder, self-taught programmers and college roommates who built the Bidbud app over the course of a year while attending the University of Washington Tacoma.

The young entrepreneurs believe the gig economy is the future of labor and services and therefore must be steered in a direction that will provide a better life for people. They designed Bidbud to be an effortless process from start to finish, removing any and all barriers that would keep people from working and posting jobs.

James Fakhoury, CEO, BidBud: “The gig economy is growing, but the model hasn't changed. With most gig economy platforms, you’ll find a list of workers and the services they offer at fixed prices. These platforms often charge fees and enforce strict guidelines, which inhibits creativity and keeps us in a place where we’re not able to innovate as workers and consumers of services. Bidbud is a great solution because of its simple design and ease of use. If you are a worker looking for a job, the app allows you to bid on as many jobs as you want for free, opening the worker up to different job opportunities. Conversely, if you are in need of a job or service, you don’t have to spend hours hunting for the right person for the job – you simply post a job description and wait for bids to come in.”

Users post a job or service they need completed by providing a title and job description. Workers search for jobs in their area, and once they find a job they like, they place a bid (quote) on the job.

This bid can either be placed as a flat fee or as an hourly rate. As different workers place bids on the job, the job poster chooses a worker based on their bid amount, estimated job duration, ratings, and skills/qualifications. Once a worker is chosen and confirmation is given, the two users will be connected and they can begin to communicate outside of the app. Payment for the job will be facilitated outside of the Bidbud platform.

James Fakhoury: “As our country battles a global pandemic and economic recession, we’re going to see a massive shift toward the gig economy, especially over the next five years,” Fakhoury said. “People will begin searching for non-traditional forms of employment. Our mission at Bidbud is to help shape the gig economy into a sustainable element of modern society, one that fosters creativity and gives people control over their own destinies.”

Bidbud, which recently raised an undisclosed amount of seed funding, is currently available on iOS and Android devices.